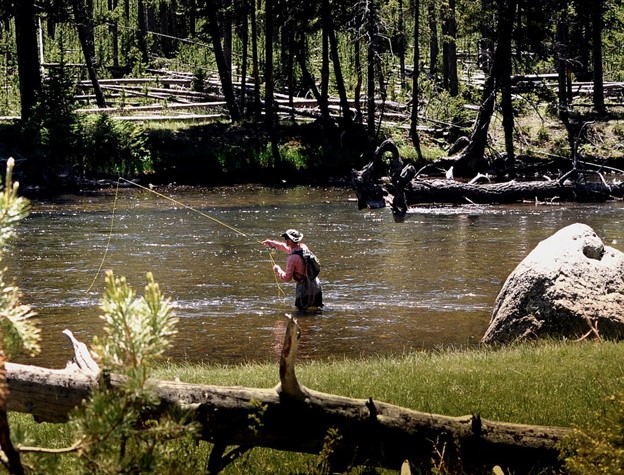 101 Fly Fishing Tips for Beginners Tip #7: Types of Reels: Reels – There are three main types of reels that you can choose from when it comes to fly fishing: (1) baitcasting reels, (2) spinning reels, and (3) Spin cast reels.

The reel that you choose will depend on your own personal preferences.

Baitcasting reels: Baitcasting reels have better accuracy and control of the lure than other reels. They are better equipped to handle lines that are ten or more pounds in weight.

The one thing to be aware of when using a baitcasting reel is that they often have the tendency to snarl or fight back when the spool starts to spin faster than the line that is being played out. This is particularly true if you are casting into the wind.

To prevent these backlashes, baitcasting reels have a magnetic braking feature but you’ll want to count more on the control of the spool tension, which is a knob that is usually located right beside the handles.

You’ll need to set the spool tension knob for each lure by holding the rod straight and disengaging the spool. Loosen the tension just until the lure begins to drop down and then tighten the spool just a bit.

When you’re casting the reel, you’ll disengage the spool and then hold it tight with your thumb. When you want the lure to move forward, you’ll simply loosen up on the pressure.

After some practice you’ll learn to control the speed of the spool so that you have better accuracy.

Spinning reels: Spinning reels are reels that have a spool that is stationary. The line is spun onto the spool as a device called a “bail” rotates around it.

Spinning reels can be used for any size of line but more experienced fly fishers will use it for lightweight lures with a weight less than ten pounds. Spinning reels tend to perform a little better than baitcasting reels when you’re casting into the wind.

One disadvantage of using a spinning reel is that there is the inevitable twisting of the line which will create tangles and knots. When your line becomes twisted the best thing that you can do is replace the line with a new one.

One way that you can prevent some of these tangles from occurring is by putting the spool into a glass of water for about 24 hours before you head out to go fishing, giving it a chance to soak.

You can control how far you cast the line by letting the line move along your index finger as close to the spool as possible as the line unwinds. When you want to stop the line, you simply push your finger against the lip of the spool.

Spin cast reels: Spin Cast reels are also known as “push button” reels. They are closed face and are amazingly easy to use. They are almost impossible to tangle and can be cast in smooth, long arcs without twisting.

The main portion of the spool is encased in a covering, and it remains in one place while a pick-up pin spins around the spool. When buying a Spin cast reel make sure that you don’t buy the most inexpensive one since you want to pay for excellent quality.

Many beginner fly fishers do well with a Spin cast reel. To cast the Spin cast reel all you need to do is press the push button and hold it down. You’ll press the button when you want your lure to move in a forward position.

Most Spin cast reels can be used with any weight lure or line size.