Draft Horses Choice of a Mare 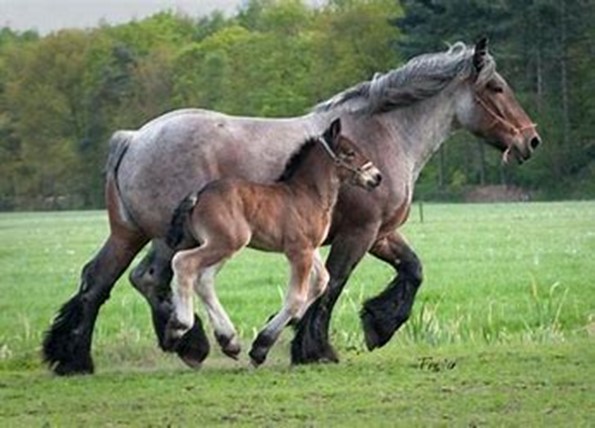 Draft Horses Choice of a Mare

Draft Horses Choice of a Mare due allowance being made for the differences in natural con formation presented by the females as compared with the males of the equine species, the brood mare should possess all the qualifications previously stated to be desiderata in both sexes. The body of the mare should be longer, the head, neck, and fore-hand less massive, the croup and thighs larger, and the abdomen and pelvis relatively more capacious than corresponding regions of the stallion.

The generative organs and mammary glands should be well developed, and free from blemish or indications of disease.

Mares conceive from the age of two years to advanced life.

Many have been known to breed up to twenty-five, but beyond the age of fifteen or sixteen years even in the most robust procreative powers decrease, conception becomes uncertain, and their foals are generally small and weakly. As an instance of procreative power almost unparalleled, it is recorded that the great grandam of Massey’s ‘ Mansetta ‘* (a stallion foaled in 1813) was barren twice only in twenty seasons.

Fillies served at two years old, and so coming into profit as reproductions at three, will rarely develop into very high-class animals, and when it is considered advisable to breed from them thus early, they should not be subjected to work beyond that re- quired to break them in, until their first foals are two months old.

The best age to put a mare to the horse is at three years old, so that when she is sold in the autumn of her seventh year, the owner will probably have obtained two foals, the value of which, added to the earnings of the mare as a team animal, will leave her full sale price to represent the proprietor’s profit.

Subject to the influences previously considered, the alliance of strong young mares with aged and robust stallions is the most certain method of obtaining a yearly production of good foals. Mares that have been worked up to ten or twelve years old in towns, and acquired at that age for breeding purposes, seldom fulfil the desires of the purchaser; by the maintenance of high condition for a prolonged period they are rendered prone to sterility, and if fecundated, they are apt to experience difficulties in labor.

When moderately well nourished, comfortably lodged, and unfatigued by excessive and long-continued labor, mares are apt to breed at all seasons of the year, thereby affording the owner an opportunity to secure the dropping of his foals at a time when the exigencies of team labor are not very pressing, and when a fresh and abundant supply of green food can be assured for the mutual benefit of the mare and offspring.

Mares continually worked, or those having to seek their food in the spring from poor pastures, are much more certainly fecundated than their idle or stable-fed sisters supplied with rich and abundant provender.

The appearances of that physiological condition termed ‘ cestrum,’ ‘ heat,’ ‘ in use,’ etc., are usually manifested in the mare by general signs, and by phenomena presented by the generative organs.

The intensity of the objective signs varies very much in different individuals ; in some, all the symptoms are evinced by inappetence, increased thirst, agitation, impatience, frequent neighing, and efforts to urinate ; the vulvae are swollen—the lining membrane reddened, and a white glairy discharge issues therefrom ; in others, no signs are recognizable by which the condition of ‘ heat/ can be inferred. Its presence is not apparent until the mare is * tried ‘ by a stallion.

The most opportune time for a matron mare to be served again is the ninth day after foaling; for subsequent proof that she has conceived, the twentieth or twenty-first day after service is usually selected. Many usages are still had recourse to in the endeavor to ensure conception by mares that have previously shown an indisposition to be fecundated, but the barbarous customs much practiced in former years by ignorant persons for the attainment of that object are now happily becoming of less frequent occurrence.

Acting upon the knowledge that exercise has the effect of provoking the evacuation of the excreta, and also of rendering petulant females more tranquil, the Arabs gallop their mares to excess, and submit them to the stallion fatigued and inclined for rest.

The most novel practice in this respect is the administration of about two-thirds of a pint of vinegar to the mare immediately after service. I have no experience of this mode of treatment, and I fail to see any physiological reason why it should be successful.

Complaints of the infecundity of a stallion are ever frequent, and often so when the cause is entirely due to the unfit state in which the mare is presented; unless she is served at the moment in the plenitude of heat, her owner should attach no blame to the horse if the essay proves unfruitful.

The abstraction of blood has in some cases been followed by successful results; but the most rational practice that can be adopted is to reduce the condition of mares, refractory to conception, by submitting them to a prolonged course of cooling diet, of which corn should form no constituent, and, after completion of the act, to leave them in a state of perfect quietude for several hours.