Draft Horses Rearing from Two to Three Years Old there is not so much necessity for two- and three-year-old unbroken colts as for weaners and yearlings to be supplied with highly nutritious food, but the allowance should still be maintained substantial in quality and quantity.

There is also less objection to straw-yard feeding at this period than when younger; but the general opinion prevails that until the time has arrived for colts to be put to work, keeping them at pasture is attended with the greatest amount of benefit, and at the above-named ages in favorable summers they thrive remarkably well upon marsh pastures.

When colts have attained the age of about two and a half or three and a half years in the hands of the grazer they are usually offered for sale at fairs, of which Waltham and Rugby are types.

To farmers who do not possess the necessary conveniences for bringing up young horses economically, and whose teams must be replenished to fill vacancies created by the sale of five- and six-year-old horses for commercial purposes, these colts, recently taken from rich pastures, at the end of summer are in good condition, and fit for immediate breaking and yoking by their new owners.

Some farmers who cannot be designated either breeders or grazers can breed and rear enough colts to keep up the numerical strength of their teams, diminishing each year by the sale of mature horses.

The following statements represent the profit which may be expected to accrue from the breeding and rearing of draught horses. Table No. 1 demonstrates the results of breeding from animals of high class, and the rearing off their offspring in such a manner that they will be maintained throughout the whole period of their growth in the best possible condition as growing animals, whilst Table No. 2 represents the consequence of breeding from inferior animals, and the rearing of their progeny by systems of management commonly practiced, but not advocated in this essay. 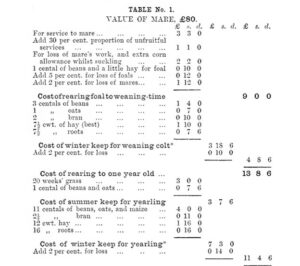 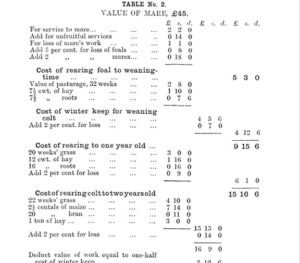 See Next: SECTION III – ON FEEDING