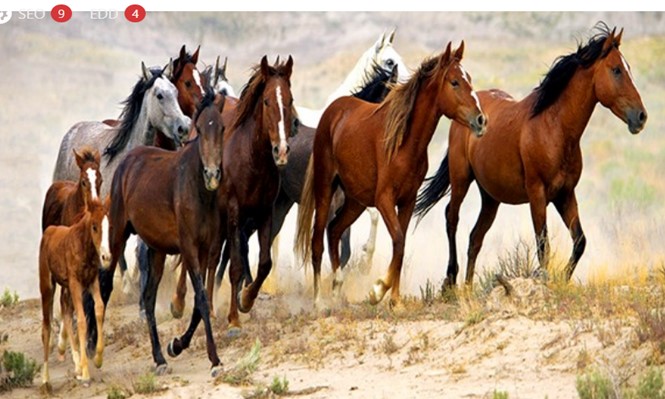 The Art of Taming and Training Wild Horses – How to Lead a Colt by the Side of a Broken Horse.

If you should want to lead your colt by the side of another horse, as is often the case, I would advise you to take your horse into the stable, attach a second strap to the colt’s halter, and lead your horse up alongside him.

Then get on the broke horse and take one strap around his breast, under his martingale, (if he has any on,) holding it in your left hand. This will prevent the colt from getting back too far; besides, you will have more power to hold him, with the strap pulling against the horse’s breast.

The other strap takes up in your right hand to prevent him from running ahead; then turn him about a few times in the stable, and if the door is wide enough, ride out with him in that position; if not, take the broke horse out first, and stand his breast up against the door, then lead the colt to the same spot, and take the straps as before directed, one on each side of his neck, then let someone start the colt out, and as he comes out, turn your horse to the left, and you will have them all right.

This is the best way to lead a colt; you can manage any kind of a colt in this way, without any trouble; for, if he tries to run ahead, or pull back, the two straps will bring the horses facing each other, so that you can easily follow up his movements without doing much holding, and as soon as he stops running backward you are right with him, and all ready to go ahead.

And if he gets stubborn and does not want to go, you can remove all his stubbornness by riding your horse against his neck, thus compelling him to turn to the right, and as soon as you have turned him about a few times, he will be willing to go along.

The next thing, after you are through leading him, will be to take him into a stable, and hitch him in such a way as not to have him pull on the halter, and as they are often troublesome to get into a stable the first few times, I will give you some instructions about getting him in.

How to Lead a Colt into the Stable and Hitch Him Without Having Him Pull on the Halter.

You should lead the broken horse into the stable first, and get the colt, if you can, follow after him. If he refuses to go, step up to him, taking a little stick or switch in your right hand; then take hold of the halter close to his head with your left hand, at the same time reaching over his back with your right arm so that you can tap him on the opposite side with your switch; bring him up facing the door, tap him lightly with your switch, reaching as far back with it as you can.

This tapping, by being pretty well back, and on the opposite side, will drive him ahead, and keep him close to you, then by giving him the right direction with your left hand you can walk into the stable with him.

I have walked colts into the stable this way, in less than a minute, after men had worked at them half an hour, trying to pull them in. If you cannot walk him, it at once this way, turn him about and walk him round in every direction, until you can get him up to the door without pulling at him.

Then let him stand a few minutes, keeping his head in the right direction with the halter, and he will walk in, in less than ten minutes. Never attempt to pull the colt into the stable; that would make him think at once that it was a dangerous place, and if he was not afraid of it before, he would be then.

Besides we don’t want him to know anything about pulling on the halter. Colts are often hurt, and sometimes killed, by trying to force them into the stable; and those who attempt to do it in that way, go into an up-hill business, when a plain smooth road is before them.

If you want to hitch your colt, put him in a tolerably wide stall which should not be too long, and should be connected by a bar or something of that kind to the partition behind it; so that, after the colt is in, he cannot get far enough back to take a straight, backward pull on the halter; then by hitching him in the center of the stall, it would be impossible for him to pull on the halter, the partition behind preventing him from going back, and the halter in the center checking him every time he turns to the left or right.

In a state of this kind, you can break every horse to stand hitched by a light strap, anywhere, without his ever knowing anything about pulling. But if you have broken your horse to lead, and have taught him the use of the halter (which you should always do before you hitch him to anything), you can hitch him in any kind of a stall, and give him something to eat to keep him up to his place for a few minutes at first and there is not one colt in fifty that will pull on his halter.